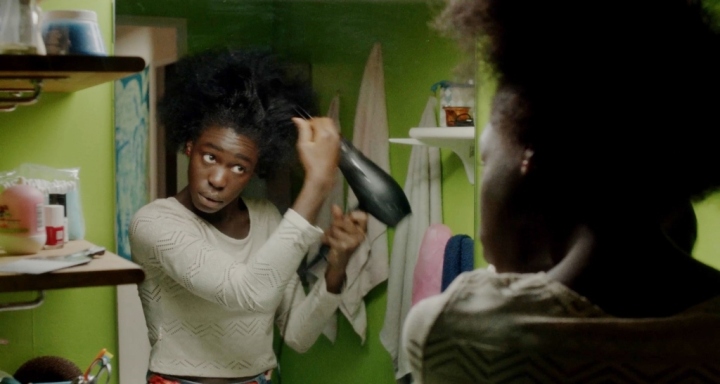 Josza Anjembe’s latest short French (Le bleu blanc rouge de mes Cheveux) tells a very courageous tale about a Cameroonian teenager girl who resides in France with her family. Due to her passion for France and her inspirations of studying politics, she aspires for one thing: getting her French Nationality. But her decision to do so may jeopardize her close relationship with her father, who is fiercely opposed to it.

Grace Seri is flawless as Seyna. She plays her role impeccably as a teenager who wants to start making decisions for herself but is conflicted by the reaction she gets from her family, especially her father. The chemistry between her and her on-screen father is electrifying, their bond is amazing and it is fascinating to see the dynamic of their relationship change based on her decision.

Augustin Ruhabura plays her father, the ‘king of the household’. He flawlessly portrays a father who is so used to his family following his orders but doesn’t know what to do when he finds himself challenged by his daughter.

Seyna’s African roots are definitely evident in the film. Mata Gabin who plays Seyna’s mother can be seen in certain scenes proudly wearing brightly coloured African printed clothing such as a head wrap and a lovely dress. Josza does well in giving you a taste of the African culture.

French speaks on the themes of courage and identity. It highlights the fact that you don’t have to identify with one group; you can identify with more than one. When or if you experience people not agreeing with your decision, it is ultimately your choice and you need to do what makes you happy. French does everything and more to specifically highlight that. Josza definitely has a good chance of winning an Academy Award as this is an exceptional piece of film.