Monique Sorgen’s short film Sorry, Not Sorry, which was inspired by a poem written by the great William Carlos Williams’ “This is Just to Say” tells a hilarious and relatable tale about a couple, whose one-upmanship reaches unexpected heights! We had the absolute pleasure of talking to this brilliant director/writer/producer about the cast in the film, the positive things she experienced whilst making this short, the difficulties she experienced and why she was inspired by William Carlos William’s poem.

Sorry, Not Sorry is an expression that’s been in the zeitgeist for a few years now, and one that I think perfectly describes the tone and the attitude of the speaker in William Carlos Williams’ poem, “This is Just to Say.” The speaker of the poem basically says (and I’m paraphrasing), “I know you didn’t want me to eat your plums, so I’m apologizing to you, but they were really delicious and actually the perfect snack for me, so I’m glad I did it.” That is literally the meaning of the expression, ‘Sorry, Not Sorry‘. I think it’s so interesting that a poem written in 1934, perfectly depicts an expression that was birthed on Twitter in 2011. To me, it shows that human nature never changes, no matter how much time goes by.

I’ve always loved this poem because it says so much with so few words, and I find it totally unpretentious— which is a quality that can be hard to come by in poetry. I learned of it in my Freshman English Literature class at UCLA when I was 18. Back then, I kept a journal of all my deep thoughts. So recently, over the holidays, I thought it would be fun to re-read that old journal, to see if I had changed (which I haven’t much), and I came across a page where I had written down the poem, and next to it I had written, “This would make a great short film!” In that instant, the whole story and structure for the short film came to me in a flash, and I had written a first rough draft within the hour.

They are all amazing and professional actors, who come to set prepared and give you more than you ever could have imagined. Watching these actors bring 3 and 4 dimensions to your characters reminds you why you got into directing win the first place. You probably want to know how I got such amazing and recognizable actors to do a short film, and part of the answer is simply that I asked. I believe that actors want to act— especially if you have a strong script and meaty characters to give them. Also, we were only shooting for one day, so it wasn’t a huge commitment for them.

I got Wallace Langham to read the script through mutual friends (one of which was my cinematographer— so Wally knew the film would be well lit). Once I had Wally on board, it made it easier to attract M. Emmet Walsh, whose manager had a lot of respect for Wally, and was open to having her client be in a film that Wally had approved. Emmet read the script and he liked it, so he said yes, despite the fact that he had to learn almost 7 pages of monologues— as he is the only character who speaks in the film.

Jessica Oyelowo had a kid in my niece’s class at school, so I had met her before, and my sister had her contact information. I showed her the script and the look book and told her about the other amazing actors she’d be working with, and the amazing DP (Troy Smith)— who has shot music videos for almost every rock, rap, and pop star you can think of, including Beyonce— and she agreed to do it, too. 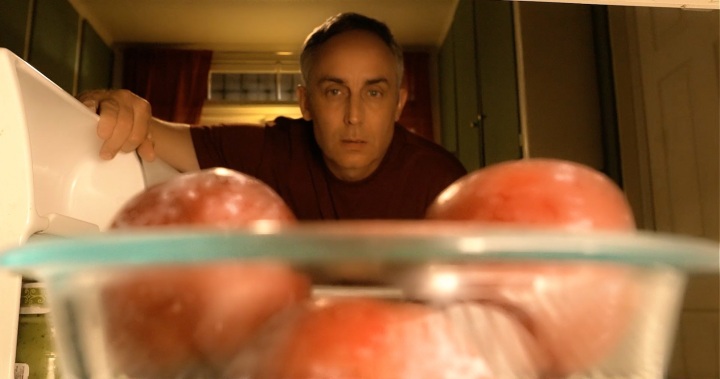 Making a movie is never easy. In fact, it’s usually a long list of difficulties you have to overcome. In preproduction, the hardest thing was finding a location in Los Angeles that fit our budget and had all the entrances and exits I needed, as well as the view from the kitchen to the living room, where the father is watching TV. I also wanted a kitchen that had green colors, to contrast the plums for the color scheme I wanted to create. I never did find a kitchen that fit all the criteria, so I convinced the woman in the house that we used, that her all-white kitchen would look great with green trim, and I would be happy to paint it for her. She liked the idea of a free remodel, so I painted her kitchen.

In production, the main problem is that you never have enough time to do everything you want. We started at 2pm so we could have daylight and go into the night to do the night shots all in one shoot day. My plan was to shoot the daytime kitchen stuff, then shoot Emmet’s stuff in the living room in the daytime, and then shoot his night stuff, so he could go home early, before going back to the kitchen with Wally and Jess to shoot their night stuff. Unfortunately, we got behind schedule, and the sun went down while we were still shooting the kitchen. Once night fell, we had to shoot night kitchen stuff, so I didn’t end up getting to Emmet’s scene until the end of the shoot at 2am. I felt so terrible for keeping him up so late, but Emmet was a total trooper. Most of his lines were supposed to be off screen, but I had still hoped to shoot them, just in case I wanted to use his daytime scenes— which at this point, I didn’t think I’d be able to get at all. Then Troy said, “Give me 5 minutes.” And 5 minutes later the living room looked like a bright, beautiful sunny day, even though it was the middle of the night. Everyone on set gasped. It was absolute perfection.

While movie making is never easy, there’s also a magic that happens when you make a movie. Things come together magically, right when you think they’re not going. People show up for you. Overall, I thought the shoot was invigorating. The actors were so fun to watch. The lighting and camera team (most of whom came from working on the TV show “Black-ish”) were so good at their jobs, and added so much texture to the look and the shadows on the walls. Everyone on set was incredibly positive and excited to be there— from the professionals to the students I’d brought over from UCLA as PAs. It was a real sense of community. When I finished packing up my stuff it was 6am, the sun was coming up, and I sat on the front stoop with the owner of the house and we had a glass of wine as people were commuting to work, while we absorbed what a great movie we had just put in the can. I knew I had all the pieces, and the cast and crew had been such a joy to work with.

I learned that a lot of people are equally as cultishly passionate about this poem as I am— including some of my very closest friends. People who know and love the poem seem to get doubly excited about the film. It gives them a little something extra to enjoy in the story. I also found out that the poem has a Twitter. 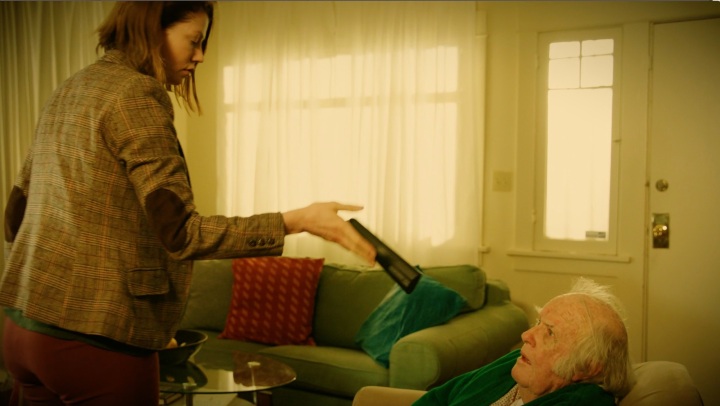 My goal is really to use this film to springboard myself into features. It’s so much money and time to invest in a short film, which you ultimately won’t make any profit from. And as fun as it is to tell short stories, sometimes you wonder if it would really be that much more work to just make a feature length film… That said, I do have another short film in the can, which is a proof of concept for my feature film, “Bad BFF.” It’s actually a scene from the feature film script.

As mentioned, I’m developing a couple of feature films to make next. The one I just mentioned, “Bad BFF” is something I’m working on with Jessica Oyelowo and her production company Yoruba Saxon. It’s a dark comedy about a woman who pretends she’s getting married in order to get her best friend to spend more time with her, by being her “maid of honor.” It’s a story about the strong bonds that exist in female friendships, and how those friendships can be torn apart when people get married and start families. For the woman who isn’t moving on, it can be a very painful feeling of rejection, when her friend stops having time for her. But it’s also hard for the woman who is starting her new life and family, because she has so many more new obligations and priorities, and even though she no longer has time for them, she usually really misses her friendships. I’m also developing a movie based on my novel, “How Long You Should Wait to Have Sex,” which is a romantic comedy about a girl who meets the perfect guy, has sex with him on the first night, and when he never calls her again, she wonders if it’s because she slept with him too soon. She wishes she hadn’t, and her wish comes true, and she ends up getting several do-overs, where she goes back in time to wait longer an longer so she can find out how long she needs to wait to make him fall in love with her.